4 Inspired Ways to Get the Respect You Deserve

Either way, it is crazy-making to deal with a flirty husband!  It’s scary to think what that might lead to.

Download This One Powerful Tip to Instantly Deepen Your Commmunication

Does he really expect you to turn a blind eye to such blatant misbehavior?  How are you supposed to ignore his ogles, smiles, and winks?

That’s not right.  He should be more respectful and control himself.

But what if he won’t?

It’s embarrassing, and it can make you feel like a fool.

Fortunately, you can use your influence to put an end to such disrespect.

Here are 4 ways to end the flirting problem and get the respect you deserve, without having to just ignore it.

Flirting has many purposes.

It could be reward-seeking or looking for proof that he’s still “got it.”

It could be an awkward way of getting your attention, even if it’s negative.

It could also be a way to shore up a self-esteem issue.

That doesn’t make it right.

That doesn’t make it okay.

But knowing that could be a clue that helps you resolve the issue.

Here’s what I mean: No marriage is perfect – not even mine. If yours isn’t perfect either and if your husband is dissatisfied with the relationship because you’re unhappy with him (maybe because of all his ogling), he may compensate with what he considers harmless flirting.

We all have a deep need to be heard and seen and known in big and small ways. That’s just human. If he’s looking for that, ask yourself: Has he been able to get that from me recently?

I’m NOT saying his flirting is your fault. Not at all.

But if your relationship is falling short or you’ve lost the joyful spark that attracted him in the first place, then you have more power than you realize to keep his wandering eyes firmly planted on you.

And it’s not going to happen by scowling at him, even though you’re hurt and upset.

That’s a very common mistake I see so many women making, but it actually makes things worse because what he’s missing the most is your happy, sexy smile directed at him.

Have you flashed him one of those recently? Can he still get the validation and approval from you that he used to get?

It’s easy to become serious or overwhelmed when there’s a lot on your plate. You may have lost the playfulness you once had.

Consider what’s happening on your side of the street.

Ask yourself if you have behaviors that might cause your spouse to feel insecure?

Of course you don’t intend to make him feel insecure, but him flirting could actually be a symptom that he’s not sure you think he’s still “got it.”

Just letting him know that you think he does could go a long way toward ending his flirting with others. 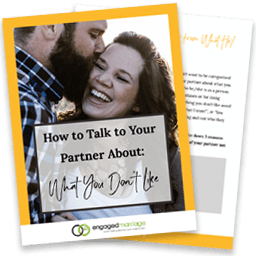 Are you annoyed by some of the things your spouse does?

Enter your email below to get my workbook to learn how you can talk to your partner about anything that’s bothering you without starting World War III.

When Mia was worried about her husband’s too-close-for-comfort relationships with other women, she laid down the law and made it clear that if he ever cheated, she’d be out of there.

Guess what happened after her ultimatum?  He cheated.

That’s not to say it was Mia’s fault, but it was a painful lesson for her that what she focuses on increases.  Now that she has shifted her focus to how faithful he is and how much he wants to please her, she’s the one he’s flirting with!

No one likes a nag.  If you bring up every one-off instance where he flirted, that will only make him feel like your personal punching bag, and he’ll retreat even further.

Also, if you’re anything like me, you don’t just want him to stop flirting, you want him to want to stop flirting.  But laying down the law does just the opposite of what you want it to do. The moment you make an ultimatum, you’re dangling forbidden fruit that actually makes him more likely to continue the unwanted behavior, as I explain here.

Is there a certain stressor in your marriage that leads to him flirting?  For instance, does he get more flirtatious with other women after you’ve had a nasty spat?

It can be even more crazy-making when that happens, but consider the possibility that you could interrupt the whole vicious cycle yourself by changing up just your lines in the familiar argument you have about flirting, just like Mia did.

3. Get More Respect and Reconnect with These Three Words

Men want to feel masculine.  Going into mom mode by scrutinizing his every move tends to have the opposite effect (not to mention killing the intimacy since nobody wants to have sex with his mother).

So don’t get too caught up in the details of his flirting, like saying, “Remember that one time you ogled the barista and the waitress after and the very next day the crossing guard?”

Naming names will put him on the defensive.  Nobody’s at their best when they feel defensive.

Instead, listen to his side of the story, even if you don’t agree with it.  Simply responding with “I hear you” when he opens up and shares with you is a magical way to create a culture of mutual respect.

After all, conflict resolution is a two-way street.

If you’re not rehashing the dirty details of his deeds, what are you supposed to communicate about?  Try recognizing his strengths and the strengths of your relationship.  Consider going a step further and actually expressing your gratitude for all those strengths.

This does double-duty: You quit giving oxygen to the behavior you don’t want (which actually increased it), instead increasing what you do want to see more of.

You’ll also create a culture of gratitude this way, so be prepared to be on the receiving end of lots more appreciation!

4. Bring the Butterflies Back

Make your marriage fun!  Use tiny gestures that show him your flirty side.  Hugging, kissing, and handholding are all strong relationship anchors.

An old ad for jeans wisely put it this way: You flirt not because he looks good but because YOU do.

In other words, feeling good about yourself – whether it’s because you gave yourself a pedicure, are flush from a brisk walk, or spent the whole day at a spa–is a great springboard to flirting.

Outside flirting is often a way for him to rediscover the passion and excitement you shared in the early days of your relationship.  If you miss that too, think about what you could do to bring back those butterflies-in-your-stomach moments.

When Candace’s husband’s flirtation with his secretary went too far and he told his wife he needed a three-month break from her, she went full Goddess of Fun and Light mode.  She piled on the fun, indulged in activities that made her happy, making a point to schedule at least three per day.

She dialed up the gender contrast by dressing sexy and feminine.  She honored her desires, even buying herself flowers.  As she focused on what she wanted, she considered going overseas to pursue her studies.

But her husband talked her out of it!

She’d become so irresistible that he couldn’t even wait three months before coming back home.  He started saying “I love you” several times a day, which he had never done in all their years together.  He now held her so tightly at night that she ended up sleeping crooked so as not to forego the delicious snuggling.

The chemistry was definitely back!  And the extracurricular flirting was gone.

The same can happen in your relationship when you focus on doing the things that bring you closer.

I was the perfect wife – until I actually got married. When I tried to tell my husband how to be more romantic, more ambitious, and tidier, he avoided me. I dragged him to marriage counseling and nearly divorced him. I then started talking to women who had what I wanted in their marriages and that’s when I got my miracle. The man who wooed me returned.

I wrote a few books about what I learned and accidentally started a worldwide movement of women who practice The Six Intimacy Skills™ that lead to having amazing, vibrant relationships. The thing I’m most proud of is my playful, passionate relationship with my hilarious husband John – who has been dressing himself since before I was born.