The Time to Work on Your Marriage is Now!

(Wo)Man Up! Feminine and Masculine Roles in a Relationship 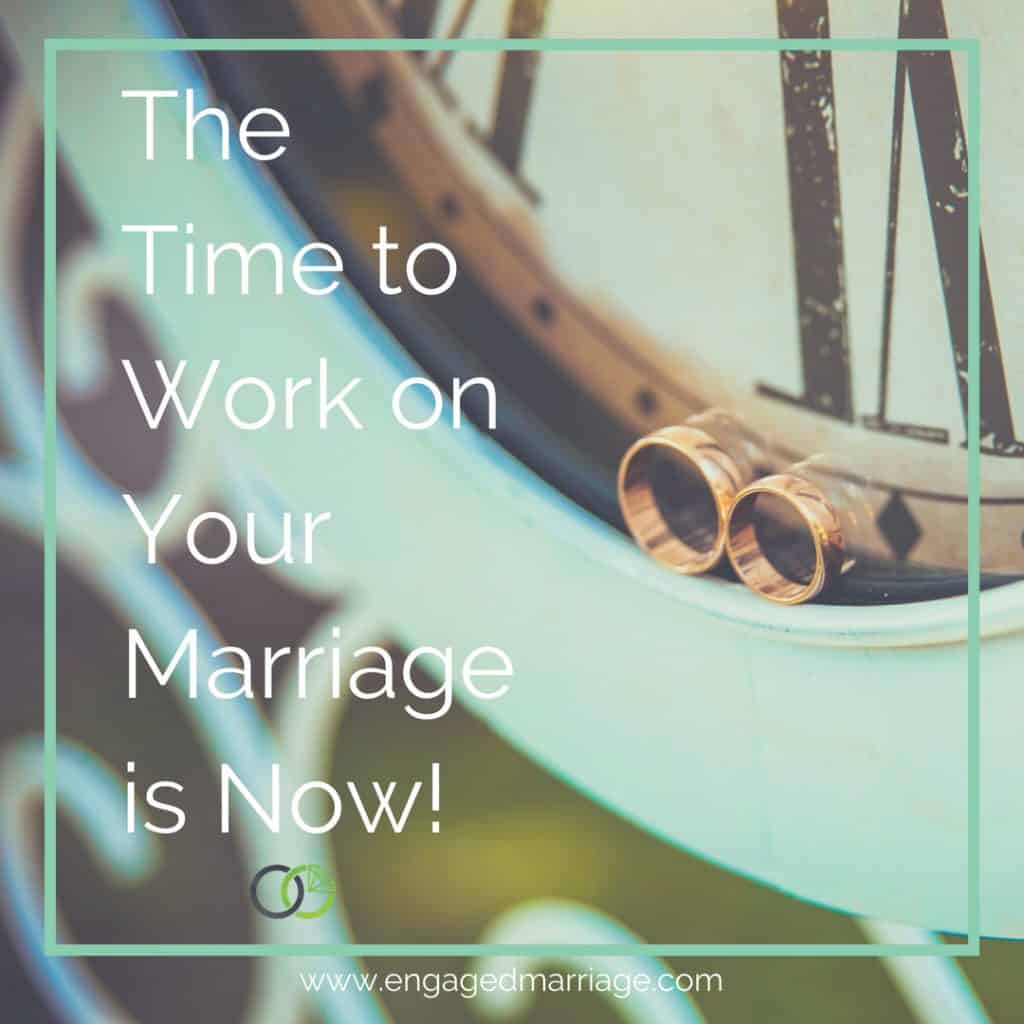 No one expects the honeymoon to last forever.

No surprises there. We all know that even when you work on your marriage it will have its ups and downs.

Where you’re at today is not where you were yesterday, or where you’ll be tomorrow.

But where are the two of you at, exactly?

Here are some classic lines we hear…

I mean, why bother spending time fixing something that’s not broken, right?

If something’s not noticeably broken, then it doesn’t seem urgent or important…

…which means that you’ll take the time to work on your marriage later….one of these days…someday.

Creating your dream marriage might seems like something to put off until the kids are older, or when you have more time, or money, or have advanced more in your career.

Well, guess what? There’s never a perfect time to work on your marriage, because later never comes.

The Prime Time for Divorce

If I had a nickel for every time Bethany and I have talked to a couple in their 20’s, 30’s,or especially 40’s who tells us:

“We’re doing okay right now. We have so many sports activities and stuff, but when the kids move out, we’ll be able to focus on us, and that’s when we’ll have the dream marriage that we always wanted.”

Did you know that the #2 most common age range for divorce is between 50-55? It’s right there at the beginning of the Empty Nest phase.

Can you guess why?

What happens is that life keeps moving forward while taking care of the relationship gets quietly put on the back burner.

When you put off focusing on being a couple and doing the things that make marriage awesome, you wake up one day and feel like your husband or wife is a stranger. You feel like roommates, because haven’t done anything to keep the marriage alive.

Love is a choice. And love is a verb. It’s something you have to do, not have.

If all you do is live together in the same house, go to work, take care of the kids and so on, without taking consistent effort to work on your marriage and keep the fire going, here’s what will happen.

If you put your relationship on the back burner for too long, I guarantee you’ll will wake up one day to an empty nest and realize the children were the only thing keeping you connected.

You won’t know what to do with yourselves.

And that’s so scary, because that’s when divorce happens.

Where is Your Marriage at Today?

So please, beware of the “We’re fine, we’ll work on this later” attitude.  If you get one thing out of this article, please avoid falling for it!

Make the choice to work on your marriage now, in some small way.

Do something now, even if it’s something small. Every little bit helps, and usually that’s all it takes.

If you read my previous article “3 Powerful Marriage Exercises You Can Do in 15 Minutes or Less,” it shows how it only takes a few minutes here and there to make a very powerful, positive impact.

Here’s a quick exercise. You can do this by yourself, or together if your spouse is with you.

Grab a pen and paper and draw a horizontal line on it, with a 1 on one side and a 10 on the other. Then, add a triangle in the middle at 5.

It should look like a teeter totter. Pushing down on one side is going to make the other side come up.

Now, give yourselves a grade, rating the current state of your marriage somewhere between 1 and 10.

No matter where your point is at on that line, it’s always moving. It might be to the left or to the right, and it might be slow and subtle.

That’s because marriage is a living thing. It’s either living and growing, or it’s dying and decaying. A marriage is getting better or getting worse at any given time.

Now, people will argue and say “That’s not true. We’ve been together for five years and we’re doing fine. Some days we’re a 3 and having a fight, some days we’re a 7 and the sex is great, like last night. But we’re pretty much a 5.”

A couple thoughts on that…

First of all, why would someone want to stay mediocre forever, at a 5? I understand a 10 is very hard to reach and stay at on a daily basis, or even comprehend. But wouldn’t you love to live in an 8 marriage?

How much happier would you be if your relationship with your spouse (the most important one in your life) was at an 8 or 9, day in and day out?

It would be awesome! So that’s one good reason to make the effort and work on your marriage now.

Beware of the Slippery Slope

The second reason is on the cautionary side.

While you might think your marriage is sitting squarely at 5, the days of the 3’s and 4’s are going to slowly accumulate as your marriage quietly starts to slide just a little more to the left.

It won’t feel like it’s moving at all. But if you’re in a static place (also called a rut), your marriage is going to start to slide backwards.

By that time, there’s already something majorly wrong. Maybe there’s been infidelity or hidden finances. There might be depression, drug abuse, pornography addiction, or other something else – and neither you or your spouse thought you were the kind of person who could ever do it.

And now you’re asking yourself, “What the hell happened in our marriage?” We were fine! I thought we were fine!”

You’re angry and upset, and don’t have any idea what happened.

Bethany and I hear this every single week (if not every day) from couples who come to us looking for coaching help. They tend to say, “We didn’t see it coming.”

That is the slippery slope.

These kinds of things happen when you’re stuck in a rut. Whenever the relationship slowly degrades because you’re not feeding it positive fuel, you start to slide back down that slippery slope until you fall off.

Before you know it, you’ll have some major issues and rebuilding to do.

I don’t want this to happen to you.

The Time to Work on Your Marriage is Now

Some people might be reading this and thinking,“Dang, that’s exactly what happened to us! “

Now we’re at a 1. My husband is living out of the house, and I wish I could rewind everything and be working our marriage up above 5 on that scale instead of letting it slide.”

Or, your marriage might be at 7 and you’re thinking, “Hey, we’re doing pretty well here!” That’s great! But you can’t stay complacent because it’s very easy to slide right down the scale. Keep at it!

But wherever your marriage is right now, you can only start where you’re at. Make the choice to work on your marriage now, tomorrow, and every day after that.

Give your marriage the time and attention that it needs to grow. That’s all I’m saying.

Think about that visual image of the scale and what it means for you, and always be thinking about improving.

Here’s the Next Step…

If you’re tired of being “fine” (or worse), and you want to take positive action to work on your marriage, I strongly encourage you to sign up for our FREE web class: 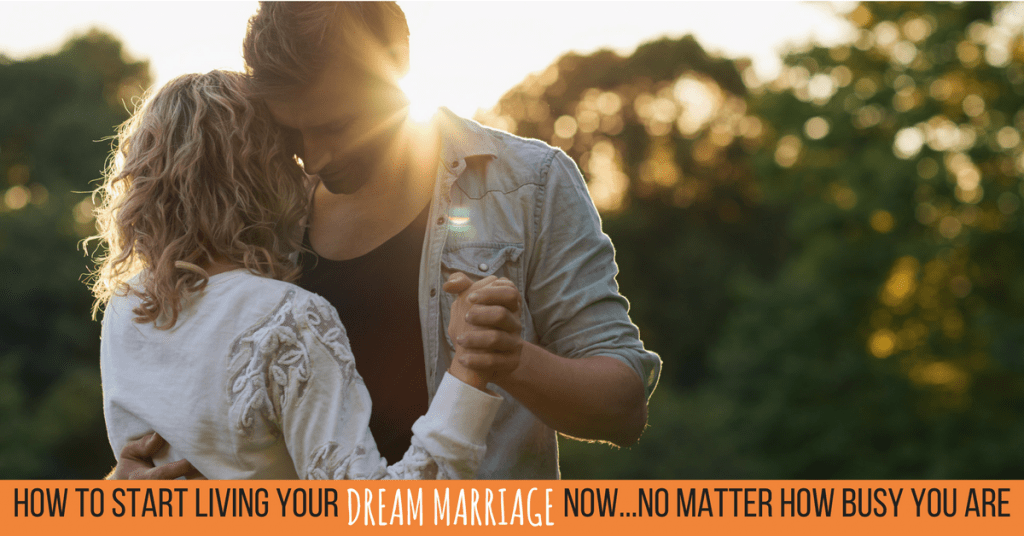 You can choose a time that’s most convenient for you to attend the web class.  We’ll give you the tools and encouragement you need to start pushing up that scale towards the Dream Marriage you desire.

You just have to take the first step.