What's in your wallet?

What’s in your wallet? 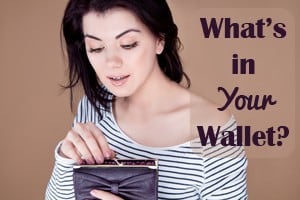 The question in the headline may bring to mind ads full of burly, weapon-waving Vikings in all sorts of amusing modern situations.

However, the question What’s in your wallet? is a serious one because it will determine your ability to think outside the box when you and your spouse have set your sights on a purchase.

You don’t necessarily need cash to do the deed, and especially if you’re working on dumping your debt, you know you don’t use credit cards, either.

You can use the other currency in your wallet, though: time, talent, and treasure.

The resources of time and talent

These are the resources that most couples reach for to generate more cash so they can buy what they’ve set their sights on.

You might spend your time and take on a second job.

If you’ve honed your talent over the years—your marketable skills and abilities—you might ask for and receive a raise, move to a higher paying position, or you can freelance.

But there is one more oft overlooked source of revenue.

The resource of treasure

Treasure, in this instance, is anything you own that you no longer need or want.

For instance, friends of ours were redoing their kitchen and needed some appliances.

They knew there were deals to be had on Craigslist, so that’s where they headed with their treasure.

Will you take a Vitamix?

I’ll let my friends tell their story, which I’ve edited just a bit.

I had a Vitamix that was given to me and collecting dust on my countertop. I happened to be searching for an appliance set on Craigslist. I felt like I hit the jackpot when I found an ad for a much desired convection oven with the option to swap for a Vitamix blender. What luck! I replied right away, but didn’t hear back. We needed appliances ASAP for the house we were moving into. I continued searching and found a GREAT set of matching appliances for a GREAT deal. We had to take everything, including appliances we didn’t need, but we didn’t mind.

We borrowed a friend’s box truck, tossed in the Vitamix just in case, and drove the hour and a half to the nearby city. We loaded the appliances. I was a little bummed the set didn’t have a convection oven, but it was still a great deal without it. Just then the other person called me, very excited about trading for the Vitamix. We headed over to other side of the city, made our swap, and headed home with our finds: a matching set of stainless steel oven, microwave, dishwasher and refrigerator, an older model washer and dryer, and my beautiful convection oven.

But we weren’t done making deals.

A friend of ours was looking for appliances for an apartment, so we offered him our extras. He named a fair price of $400 for the nearly new refrigerator and oven, which we accepted. Then we sold the washer and dryer for $50.

The final cash outlay, after all of our wheeling and dealing: just $100

We now owned a “new” stainless steel dishwasher, microwave, and convection oven—with the nice glass top I wanted 🙂 —making them just $33.33 each.

This couple looked in their wallet, and in addition to their money, they saw the Vitamix.

At the end of the day, not only did they get what they wanted at a terrific price, but they also got to do a teensy bit of decluttering by letting go of the blender.

The next time you get ready to make a purchase, step back and take a moment to asses your situation, and remember to ask yourself that very important question:

What’s in your wallet?

Comment: How have you used time, talent, or treasure to obtain something you wanted?

Kim Hall created Too Darn Happy to help you build stronger and more joyful relationships through offerings of fresh perspectives and practical advice. Having been a wife for thirty years and a mom for almost as long to two daughters, she also shares occasional cautionary tales of her own character building life experiences. Kim recently authored her first ebook, Practicing Gratitude and Discovering Joy-Thirty Days to a Happier You. You can connect with Kim on Twitter, Facebook, and Pinterest, too!

4 Marriage Money Mistakes & How to Avoid Them

How to Pay Off Student Debt as a Couple