The Tale of a Red Envelope and a Job Offer

The Tale of a Red Envelope and a Job Offer 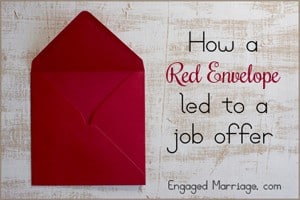 Have you ever been so tired of or discouraged with what you do that you are ready not just to change jobs but switch to a completely different field?

A young woman I know was in that very difficult place.

She had been employed in the healthcare industry for over five years, working her way from a per-diem position to full-time, and she had recently been promoted from assistant manager to a management position.

She was very excited about her new responsibilities, but it wasn’t long before she realized the fit was not right.

After lengthy discussions with her fiancee about the pros and cons of the situation, they decided it was time to not only time for her to leave the job, but to leave healthcare altogether.

The opportunity cost of staying was too great, and it was time for a big change.

After taking stock of her skills and what she loves to do, and then researching businesses that might be a match, she decided to apply to a company that caters to creative consumers like herself.

They do not accept online applications, so Ellie filled out the lengthy questionnaire, tailoring her experience to the needs of the company, making sure her responses were complete, well-thought out, and neatly and legibly written.

When she was ready to hand in the paperwork, she wanted to make sure it would stand out.

She knew she’d be in a large pack of potential employees because the company pays considerably above average for the area for hourly part and full-time employees.

Plus, the company didn’t even have any positions posted at the time.

After brainstorming different ideas for making her application memorable, she decided to put her creativity to use.

She wanted to fashion a colorful envelope, something that would be eye-catching.

It would need something on the outside—decorations, or perhaps a name or message—for some extra pop.

She found the perfect inspiration on the company’s website career page where there was a statement in large, bold letters: We’re looking for you!

She proceeded to create her envelope from bright red felt and applied white letters to read the following: I heard you’re looking for me.

This light-hearted project would potentially set her apart and make her memorable in other ways as well:

Sharing her sense of humor

Illustrating her awareness of the company’s desire for great employees

The most important role of the envelope, of course, was to get the right person curious about what was inside so she would be invited for an interview.

When Ellie brought her colorfully packaged application to the business, she asked to speak to a manager.

They spoke briefly, and he explained they weren’t currently hiring.

He was amused by the envelope, however, and commented positively on it.

With the delivery of her application complete, Ellie thanked the manager for his time and again expressed her interest in working for the company.

A couple of months later, Ellie received a call from that same manager asking her if she was still available.

She went for her interview, and the first thing she noticed on his desk was her red envelope.

The manager told her there had been a hiring freeze, but he had been intrigued enough by her approach to read and keep her information close by so he could call her when an opening came available.

The questions and conversation began, and Ellie was hired that day.

Her skills, personality, and experience were a match for what the business needed, and she did all she could to be sure her information was seen by the person who makes the hiring decisions.

Consequently, this tale of a red envelope and a job offer had a very happy ending.

The good news is that while the red envelope may not work in your situation, there are other similarly clever and related ways to get your application to the top of the pile and in front of the right person.

As Dan Miller notes in his best-seller 48 Days to the Work You Love:

The major difference between successful and unsuccessful job hunters is not skill, education, age, or ability, but the way they go about their job hunt.

So, get thinking, get intentional, get creative, and get hired!

Kim Hall created Too Darn Happy to help you build stronger and more joyful relationships through offerings of fresh perspectives and practical advice. Having been a wife for thirty years and a mom for almost as long to two daughters, she also shares occasional cautionary tales of her own character building life experiences. Kim recently authored her first ebook, Practicing Gratitude and Discovering Joy-Thirty Days to a Happier You. You can connect with Kim on Twitter, Facebook, and Pinterest, too!

3 Key Changes I Made to Be a Better Husband, Dad & Businessman…and Why I’m Starting Over

How to Say Good-bye to Limiting Financial Beliefs

4 Ways a Midlife Career Change Can Help Your Marriage