Marriage Lessons From The Road 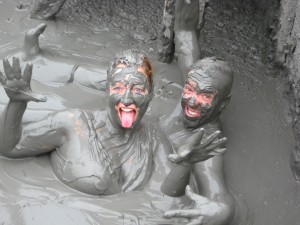 Pete and I have heard that more in the past three years than ever before. And we can’t entirely deny its truth.

“You quit your jobs and sold everything you own to travel? You’re crazy.” Yes, we realize that this is not a normal thing to do.

“You live on whatever you fit in those backpacks? You’re crazy.” Smelly and wrinkled some days, yes. So perhaps a little crazy.

Whoa, hold the phone on that one.

Sure, the adjustment was tough. We went from being independent corporate climbers who worked long hours apart to spending every minute of every day together, learning to live with each other’s eccentric (and often annoying) habits.

Old roles were also thrown out the window – no more splitting who mows the lawn or takes the car in for an oil change, instead we had to settle on who would do the research for our next destination and who would write the latest blog post. For the first few months, it was quite painful and hard on us, and it all took place in the middle of a foreign country where comforts were few.

Fast forward almost three years. We are no longer just co-existing spouses, we are a part of each other, important appendages even. Compacted time together means it feels like we have been married twenty years instead of ten. We have become a fairly well oiled machine in travel, in business after pursuing Incorporation Canada, and even in our relationship.

We’ve learned some important lessons about marriage – things we wish we would have known at the start of our travels, or even day one after our wedding.

Marriage Lessons from the Road

In the first few months of travel, this was the hardest thing to realize. Little annoyances brewed into big fights, when in reality just stepping away from the situation to clear our minds would have been the best solution. We have since learned to ask for time apart if we need it, and to not judge each other when it is asked for. Space and time alone always provides a new perspective.

As we worked our way from south to north in Colombia, Pete talked repeatedly about wanting to do the trek to La Ciudad Perdida – a lost city of the Tayrona people that required five days in the remote jungle. However, sleeping in hammocks and hiking with jungle creatures is not my idea of a good time. Rather than one of us having to compromise on this fork in the road, I ended up beach-side on my own for five days while Pete encountered scorpions and hiked in heavy humidity, and we were both happy.

For the past three years, anniversaries, birthdays and other momentous occasions are marked with new experiences, not material goods. Granted, our limited backpack space doesn’t allow for new “things” anyway, but we’ve really learned how to make special days even more memorable. I can tell you exactly what I did for my thirty-fourth birthday in Peru (took a small plane ride over ancient ruins), but ask me what I got for my twenty-ninth when still cozy at home…I couldn’t tell you.

Most recently we’ve been in Turkey for three months, a Muslim country where public displays of affection are taboo (except in the more touristy areas). Well aware of how awkward it would be to land a smooch on one another in a public place, we instead starting tapping each other’s shoe when we felt the urge. Once we got over the fact that our loafers were getting pretty scuffed up, we were pleased to have our own little ritual in place to show affection.

So, are we indeed crazy? 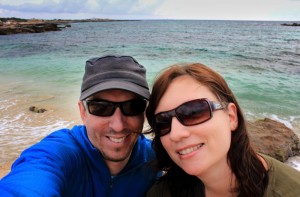 Each morning we wake up and are excited to see what the day will bring.

We are constantly introduced to new cultures, amazing scenery, food that tastes like nothing at home, all the while facing the same challenges all marriages do.  But this lifestyle has allowed us to constantly grow and understand each other unlike any other situation we’ve been in before.

It has been the best thing we’ve ever done for our marriage. And for that reason, we really don’t think we’re that crazy at all.

What do you think?  Could you be with your spouse 24/7 and love it?  Share your thoughts in the comments.

Dalene and Pete Heck are a Canadian couple who sold everything in 2009 to travel the world. They have since been to twenty-six countries together and have no plans to stop.