How Many Hats Can We Wear? 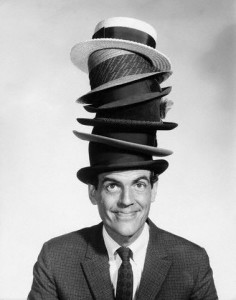 Note from Dustin: This guest post has a little different flavor – while it’s not about marriage specifically, I think the distinction between “multi-taskers” and “focused” people is a key one that many of us deal with in our relationships.

Personally, I think that multi-tasking is a lie…but we’ll discuss that in a future post. 🙂

Having a single identity can leave you feeling pretty restricted.

No one wants to be confined to a strait jacket, surrounded by the same white walls every day. Do you feel like you are constantly bouncing between those walls, wishing for a way out?

Metaphorically speaking, I often wonder how many hats I could put on my head before I lost control.

I’m what some would commonly refer to as a “Type A” personality, and doing multiple things well is just a part of my personality. Of course, it makes me wonder how much I can take on before it all comes tumbling down around me.

I don’t believe this is gender specific. I do, however, think that my mate manages one task much better than I can.

I’m constantly focused on multiple tasks, and although I get them done, it would certainly be nice to focus on one thing at a time. I don’t feel it’s it’s related to genders or traditional-gender roles because my brother is just like me. He is always multitasking whereas his wife is excellent at sorting out just one task at a time with laser-like focus.

Just this morning, I had a conversation with a couple of co-workers – one of them male and the other female. We were discussing the differences between the brain of a woman and that of a man. It was a common consensus that women are constantly thinking of multiple things while a man can focus on just a single one.

I’m not sure that I believe this to be the answer on a global scale, meaning that all men and women differ and our minds are just as different as our personalities, our fashion style, or the way we deal with one another.

I like to wear many hats; you may not. It’s that simple. What’s not so simple is the way it affects my personal life.

I spent the weekend full of farewells. A going away party for a now former co-worker, a see ya later/congratulations party for my little sister (who is moving to chase her dream career), and a graduation party for a college friend who is now moving home.

While at my sister’s party, I watched as she grilled my new mate, I believe in an attempt to see if we were a good fit. One of the many questions asked was “Tell me one thing that makes you stand out above the rest.”

My love interest clearly wasn’t prepared to answer this question. “I am unique” was all that could come out. This answer was not good enough for my very opinionated little sister, who was looking for an answer that was a little narrower, less vague.

That got me thinking. Why is it one thing that people always want to know?

Since I wear so many hats, it makes it difficult to sum myself up in one word, or even 10. And it’s very likely that the words I would use to define myself would contradict one another.

That’s the thing about us “Type A” personalities, we are absolutely undefinable because we have an overwhelming desire to do all things well. Of course, this is a task that simply isn’t possible, but that doesn’t keep us from trying..

A nurturing mother in one instant can turn to a fierce competitor the next. This happens not just in mindset, but also activities.

One moment I may be looking at what’s available at Personal Creations – in search of the best gift money can buy for my best friend’s unborn child – then within a matter of seconds I am plotting out an attempt to conquer the business world by climbing the career ladder faster than my friends all while wondering if we could save money on our car insurance by switching to Geico. Darn gecko!

While most people might bounce around between these thoughts, people like me manage to have them all at once.

I guess this brings me to the conclusion that we all have many different things that define us.

Some can put on a single hat and wear it until it has served its purpose, then hang it on a rack and hold onto it until the next time it’s needed. Me, on the other hand, I’ll pile hat on top of hat until my head begins to get heavy and the hats begin to sway. It’s at this point that I will choose one to put away, and continue to try and balance the rest.

That’s just what people like me do, for better or worse.

This is a guest post from writer Christine Michaels.