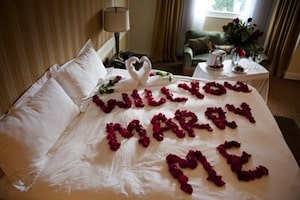 The classic scene from every jewelry store commercial or romantic comedy has the suitor dropping to one knee to present a shiny engagement ring to his gleaming girlfriend.

She puts her hands to her mouth and gasps with excitement – and surprise!

The more I hear engagement stories nowadays the more I wonder whether she was really all that shocked.

Chances are she may have picked out that shiny diamond ring herself and maybe even helped to plan the romantic night out where the question was popped.  I’ve even had friends whose girlfriend basically dictated every detail of their engagement.

And given that nearly half of couples now live together before marriage, could she really be all that surprised when the night arrives for the proposal?  After all, she may have helped pay for the ring herself.

Yet, the hopeless romantic in me has to believe that there are still couples out there doing it right!

I don’t think I’ve ever shared the story of how I proposed to Bethany, so I’ll give the quick version here.

Keep in mind that we were high school sweethearts (gag if you must), and we’d been together for around 4 years at the time.  I believe I was 20, and she had just turned 19 so we were pretty young…and broke.

While Bethany certainly had some idea this next step in our relationship was coming, I did my best to keep it romantic and tried to surprise her.

We had visited ring stores a few times where she slyly (or not so slyly) hinted about the types of engagement rings she liked…a classic solitaire with a gold band…the bigger the better. 🙂

I bought the ring without her finding out, and I actually took out my one and only student loan to help pay for it.  I do not recommend doing the same, but I was desperate to get this ring!

Before the night came, I very nervously called up her Dad to ask his permission not just for his daughter’s hand in marriage (the easy part) but if I could take her somewhere overnight (NOT easy to ask) – I unwisely chose a time when she was back home on a college break.

I lucked out and got to talk to her Mom instead, which was a bit easier.  The stage was set.

I sent her a letter beforehand using fancy language to explain what she should wear and that she should pack a bag.  I picked her up from her parents’ house and headed to downtown St. Louis for dinner at the fanciest restaurant in town – Tony’s.

At the time, I hadn’t spent much time in the city, and I couldn’t find the restaurant!  We drove all around and finally found it, nearly losing our reservation after showing up 20 minutes late.

We enjoyed an extremely nice and super expensive meal that took much longer than I had anticipated.  I was nervous the entire meal and felt completely out of place with the tuxedo-wearing waiters that swooped in to clear every crumb and tried to help you sit down when you returned from the bathroom.  I was just a simple country boy.

The next part of the night was supposed to happen outside in a quaint river town called Elsah, Illinois where Bethany had mentioned she’d love to visit sometime for a romantic getaway when we were older.  I had reserved a room at a nice little bed and breakfast on the riverfront.

I had plans to take her to a park in town to pop the question, but with my poor planning it turned out to be pitch black dark outside when we arrived.  We walked to the park, but we actually found it eery since everyone in the town was already asleep!

I abandoned those plans and nervously returned to our room at the B&B.  I decided just to go for it, so I gave Bethany a card that shared my feelings, and at the end it asked her to turn around to make me the happiest man alive.

You guessed it, I was there on one knee with that sparkly ring.  Fortunately, she said yes and we’ve pretty much lived happily ever after.

I’d love to hear your engagement story in the comments below.  Was it a planned event or did he surprise you?  Did she do the proposing?  What went right or wrong in the process?