Tis the Season… For Blindsiding Your Spouse? 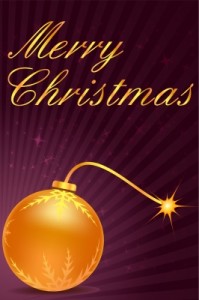 If you’ve been watching the news at all lately, you may’ve heard of this “game” some  thugs are “playing” in which they run up to an innocent stranger on the street and throw a punch with the goal of knocking the person out cold.  It’s termed, “The Knockout Game”.  Lovely.

If you’re like some of my friends, fans and readers of late, you may be able to empathize with these innocent victims on a much more personal and profound level.  See, the truth is that although we typically look towards the holiday season (Thanksgiving through New Year’s) as a time of great joy, love and warmth, there is a darker side to the season.   It’s the time of year when a lot of people decide to clean out their closets—namely of the secrets they’ve been stuffing in there.  Turns out, not all the skeletons are for Halloween.

Take my friend (we’ll call her “Kate”) who recently had her husband of less than a year reveal that when they were dating, he had a one night stand with a woman from “back home” while he was visiting family.  It wasn’t the fact that he’d “cheated” per se, since they were admittedly in that kinda-sorta-not-sure-if-we’re-exclusive phase when the event happened.  It was the idea that she now had to deal with the mess of this new information, and consider how its absence had influenced subsequent decisions—like, umm… getting married.

Why did you do that?

Why didn’t you tell me?

Why on earth are you telling me NOW?!

And perhaps most importantly:

How do we fix this?

I can’t quite tell if the timing is a conscious one or not, but ask almost anyone in the mental health community and they’ll tell you the holidays are notorious for “stirring the pot”.  And just in case that wasn’t enough to run a chill through your hot cocoa, consider the fact that more divorces are filed in January than any other month!  If you’re a therapist, lawyer or crisis hotline worker, you probably know the holidays by another name: “busy season”.

Of course, not all instances of bad news are marriage-endingly horrific, or worthy of “bomb” status.  In fact, there are times your spouse might drop a piece of bad news on of you that’s not even their fault!  For the sake of thematic consistency, I’ll call these smaller events “grenades”.  They’re not on the same level of devastation like an affair, but they catch you off guard, and frankly—it sucks. 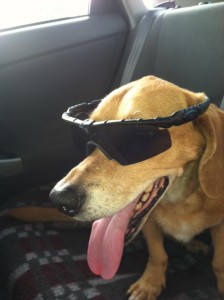 Recently, my husband took our dog to the vet for his “Senior Checkup”. As you can tell from the picture—he’s still pretty spry for an old guy!  Anyway, when I got home from work, I asked about how everything went.  Our little wonder-mutt was in perfect health, however the vet bill was not.  It was $750.  Yes. You read that right… $750 to learn that our pooch was COMPLETELY FINE.

The next words out of my mouth were: “Why didn’t you call me?!”

My husband looked at me and calmly replied, “Because he’s fine and I took care of the bill right then.”

Side note: We have an agreement that we  usually discuss major purchases over a certain amount.

“Because you would’ve told me to pay it,” he replied sounding equally confused and slightly perturbed.

But why could I not shake the feeling that someone had socked me in the gut?

After some careful thought, I realized it was because I would’ve called him.  To me, our agreement was sacrosanct.  Black and white.  Non-negotiable. And perhaps most importantly, it was an expression of equality.  I also realized it had stirred up some old hurts– not even remotely related to him—but rather in connection to the way I related to money.

In this case, he had dropped the “bomb,” but the mess was all mine.

So how do you survive a “bomb dropping” or even a “grenade”?

Here are a few things to consider—

As I’m sure you know, when it comes to good communication—even in the face of some seriously disturbing, earth-shattering news, it’s good to curb your immediate response and take a few seconds to breathe.  This isn’t just some fluffy therapist-speak either.

Without getting too technical, when the brain processes an event that elicits a strong stress response, the limbic system (aka the “emotional brain”) takes over –overriding the logical part of the brain (aka the prefrontal cortex).  Giving yourself some time to process the news allows your brain to rebalance itself, and will hopefully prevent you from saying or doing anything you’ll likely regret later.

It seems to me that when things like this happen, the person who detonated the bad news often seems to want an immediate response and then later on, a clear-cut pathway to resolution one way or another.  Here’s why this makes sense:  Depending on the secret, your spouse may have been carrying it around for hours, days or even years! S/He has had plenty of time to mull it around, evaluate it from several– if not all– sides, and then drop it on you at his/her convenience.  Simply said, they want a resolution now, but they’ve also had a head start.

I don’t think it’s unreasonable to point this out to your spouse. I once listened to a professor relate an experience of working with a patient who had terminal cancer.  This patient had already come to terms with her death, and was having angry response to her family’s reaction to the news. My professor said that he had to point out to her that while it was “old news” for her, it was “new news” for them.

In my situation, my husband had already had time to process the sticker shock, make logical steps towards resolving the issue, and research pet insurance to avoid the situation in the future, well before I ever knew anything about the original bill! Of course I wasn’t going to be on the same page! He was on a different chapter!

—it may actually be in your favor.  Yes, I just said that.

Assuming your spouse just dropped a bomb on you, like the one Kate experienced—after following the advice given in Steps 1 & 2, you’ll want to follow up with an evaluation of who’s who and what’s what.

Yes, s/he just dropped the bomb—but, if your spouse isn’t already halfway out the door towards divorce, and is interested in fixing the issue, then in many cases this puts you at an advantage for setting the terms of how, when and where the relationship will be remedied.  This is the exact advice I gave my friend Kate.

A week or so after the news, Kate’s husband thought she’d be over it.  Kate was far from feeling over it, and was struggling to appease his timeline.  In no uncertain terms, I validated her struggle.  He got to choose when to “start” the issue, and she most certainly had the right to work through it to a reasonable end.

Notice the word “reasonable”.  A reasonable end is not one where you stew and simmer for some undetermined length of time with absolutely no productivity whatsoever.  Holding grudges does not a happy marriage make.  However, processing and actively grieving the news so you can figure out where to go or what to do next is a very different story.

If you want to fix your marriage after an injury, you’ll eventually need a plan of action.  Now that the logical part of your brain is back up and running, and you’ve figured out how you fit into the equation moving forward, it’s time to make a plan.  To illustrate, let’s go back to my friend Kate:

For Kate, a day or two of feeling heard and validated by friends was enough to help her confront her husband with the painful truth that she wasn’t feeling “over it”. She calmly presented her terms:  marriage counseling, and co-reading a book I’d recommended (The Seven Principles for Making Marriage Work*), along with more quality time (one of her predominate love languages*) reconnecting and rekindling the trusting bond she’d come to adore and rely on as a wife and as a woman.  Her husband, being the wise man that he is, decided to accept Kate’s terms.

Have you suffered an emotional “knockout” or “bomb-dropping” by your spouse?  If so, I want to hear how you dealt with it! 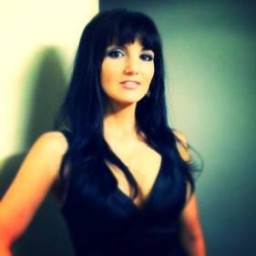