Tending the Garden: A Springtime Analogy for Making Marriage Work

Tending the Garden: A Springtime Analogy for Making Marriage Work 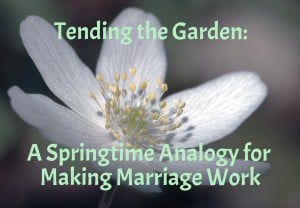 As the weather gets more temperate and lovely here in Texas, my husband and I have been spending more time outside tending to the landscaping of our home.  It all started two weeks ago because I had a “vision” of how I wanted our flower beds to look.

However when we went outside to start plotting, it quickly became apparent that we needed to do some heavy weeding and clearing out of old brush and debris before the ‘fun’ could begin.

And after the surface weeding was done, we started trying to remove some of the plants from the previous owners.

What we discovered was that seemingly lithe green stems were attached to tangled, gnarly masses that took most of what was left of the daylight to remove.  And by the end of that first weekend— we didn’t have renovated flower beds.  We had giant gaping holes of dirt and a huge pile of debris for our bulk pickup the following Thursday.

Was I disappointed?  Sure thing.  I also felt a little silly.  See, I hadn’t really paid that much care to our flower beds up until that point, because I knew I wanted to make a change.  So I just didn’t bother with them.  And in my zeal to create something pretty and new, I completely neglected to see what was already there.  Thus completely miscalculating the amount of time it would take to address, and also probably creating more work for both my husband and I by not maintaining the beds— even if I didn’t particularly love them.

Your Marriage Is a Garden Bed

Sometimes I think we have a tendency to view marriage the same way.  We know there’s something about our current situation that we don’t like.  So, we read a book.  We search the internet.  We attend a marriage retreat.  We get great new ideas and set out to make a changes:

“We are now going to do date night once a week.”

“We’re going to have sex every day this week.”

The problem is that often these plans, much like my own for our garden beds, do not take into account the weeds and underlying issues that haven’t been addressed, and that we’ve been trying not to look at because… well, they’re ugly.

Sharing more physical intimacy, or going out on dates regularly are great ideas.  However, it might be difficult to be naked and intimate with someone when old hurts keep you feeling on guard. And setting high expectations for a romantic night out when you have barely spoken in months might be a recipe for disaster as well.

I know a lot of marriage and dating websites, EngagedMarriage.com included, try to make working on your marriage relationships look like fun.  And that’s a really great thing because proactively working on your marriage absolutely can be fun!  But sometimes, it’s not going to be fun.  Or, more accurately— sometimes in order to get to the fun part— you need to go through the not-so-fun part and have the difficult conversation so that you can get to the fun part and actually be able to enjoy the experience when you get there.

Pulling weeds out of my garden bed when I’d had something else entirely in mind that Saturday is not what I call a “good time”.  And when the weekend came to a close, by some accounts, our beds look worse than when they started.  The weeds weren’t aesthetic by any means, but the bare dirt and the gaping holes that you could see all the way from the street were worse.

Difficult conversations while dating, engaged, or married can be much the same.  From personal experience, I can say that I’ve left many a difficult conversation feeling raw, exhausted and completely humbled.  But there’s also something pretty amazing that seems to occur in the days  following those periods of rawness— our relationship flourishes.

I believe this largely has to do with the way in which these difficult conversations occur.  Difficult conversations about relationships need to be limited in scope to the specific issue(s) at hand. When possible, I like to recommend tackling one thing at a time— be that spending habits, cleaning up around the house, extended family, sex life, career concerns, or whatever.  The same way I didn’t pull out every single plant in my garden beds, but rather targeted the weeds— difficult conversations in marriage need to stay focused on the issue at hand and avoid the defensive tendency to go eye-for-eye with grievances.

Sometimes, it is going to be your fault.  Sometimes, you are going to be in the wrong.  Other times it will be a dual problem that needs both parties on board.  Instead of slinging mud back across the battle line of your relationship, sometimes its better to have it hit you square in the face.  Own your slice of the humble pie.

Hopefully I haven’t beaten this flower bed analogy to absolute death just yet, because there is more to the story…

This past weekend, I finally had the opportunity to plant my flowers & herbs.  Even just thinking about them makes me so happy.  As much as I didn’t enjoy the experience of delaying my plans by a whole week in order to clean out the beds, I realized this past weekend that without the extra cleanup and prep work, there would’ve been no room for these little plants to grow.  And now instead of fighting through debris, they’re able to flourish.

This is a similar reward to what couples can experience when they’re willing and able to work through the not-so-fun stuff as well.  Working on your marriage should be about more than just damage control!  And the way to break the perpetual band-aid cycle is to have those tough conversations.

Do you find you and your spouse avoid conflict at all costs?

Is there a time when you had a difficult conversation with your spouse, and found that in the long run it paid off?

Did you try to have a difficult conversation that when horribly wrong?  And you’d do just about anything to avoid a similar experience going forward?

I want to know!  Next month we’ll be talking about more ways to approach those difficult conversations and some
specific techniques for navigating rough waters.

Should Married Couples Have Joint or Separate Bank Accounts?