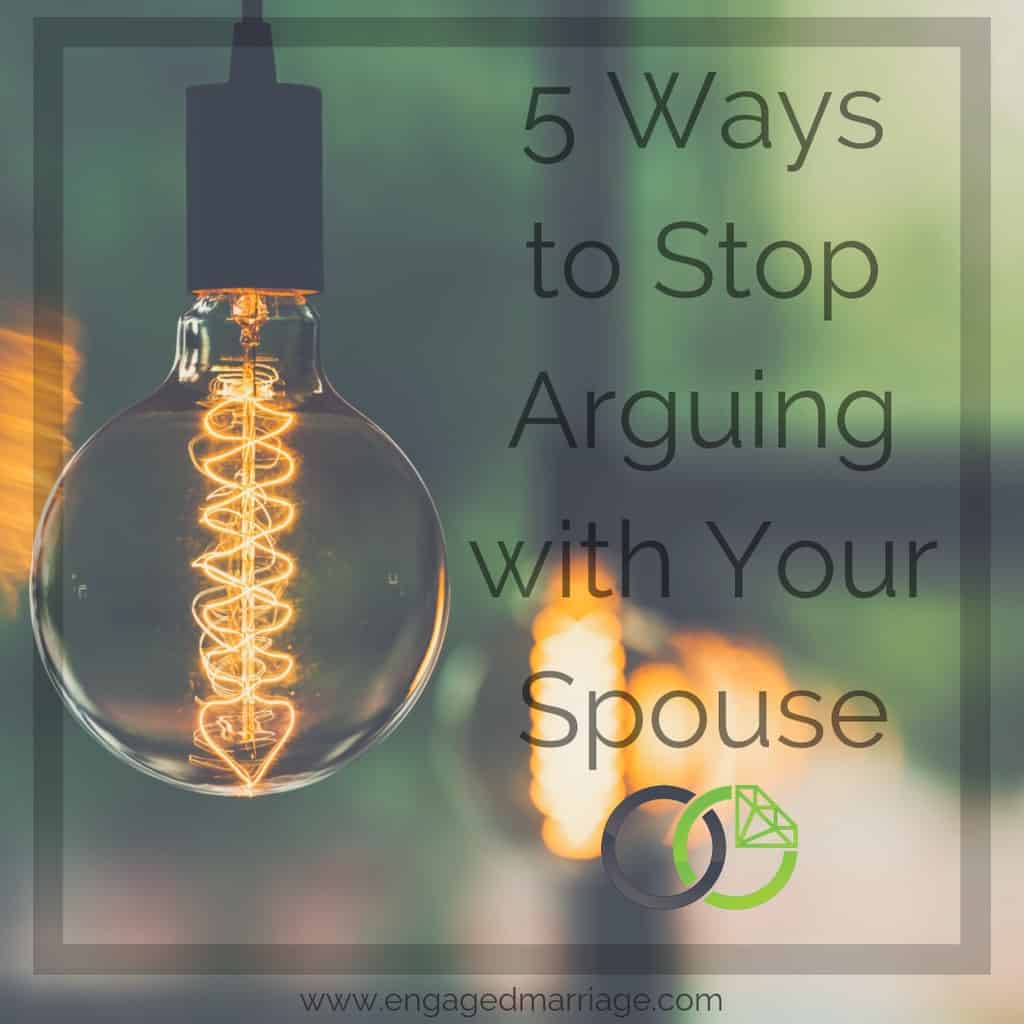 Stop arguing with your spouse…if only it were so simple!

It’s not like something like money, which is very quantifiable and systematic, as in “Do X, Y, Z, and you’ll be successful.”

Communication between one person and another is so much more personalized and dynamic, especially with your spouse.

You’ve probably been wandering around the mall before, certain the store you’re looking for is just up ahead…and then wondering where the heck it went.

Communicating with your spouse seems so straightforward, in theory.

Before you know it, you’ve gotten off track and are so caught up in it that you don’t know where you are or how you even got there.

It’s times like this I wish we had a map to reference, with a “You Are Here” sticker, just like at the mall.

Now, I don’t know if this happens in your house (it sure does in mine), but I’ll get in a conversation with my wife Bethany, and we’ll start disagreeing about something.

I literally forget what started it!

By then it has moved on to more personal things. Someone says, “I can’t believe you did that.”

And then you realize, “Wait a minute. How did we get to this?”

How to Stop Arguing with Your Spouse

Whenever you get into a tense moment with your husband or wife, it’s very likely one or both of you started to recognize that you’ve starting to gradually get off course.

You’ve probably felt things getting too tense as the conversation gets heated.

The good news is, it’s not too late to get things back on track again, de-escalate and stop arguing with your spouse.

First, notice what’s going on. Then, attempt to repair things…to break the tension, to soften the situation a bit.

This could just be a glance. It could be something you say. It could be interjecting some humor, or even a change of scenery.

Whatever it is, it’s your chance to disrupt the current cycle and get things back on task.

That “something” is called a repair attempt. Repair attempts are ways to break the tension and realize the current conversation doesn’t have to erupt into something emotionally charged.

Repair attempts are nothing more than subtle things with an amazing ability to break the pattern of arguing.

I’m going to share the top five with you so you can put them to good use to stop arguing with your spouse.

Imagine that you’re arguing with your husband or wife about something yet again and suddenly they stick their tongue out, just like a four-year old.

Would that break the mood? You bet it would.

It’s kind of silly but it works! You’re in a tense conversation and all of a sudden you recognize, “Wait a minute…I don’t want to be like this.”

So you stick out her tongue out and before you know it, they’re doing the same and you’re both laughing. After a good chuckle, you both take a short break and come back to what you were talking about.

You can also say something funny to break the mood. Just be careful!

Sometimes that’s pushing the wrong button, and you especially don’t want to come across as making light of something or making fun of her. Try making fun of the situation instead.

This time, let’s say that you and your wife are in your living room having a conversation that is turning into an argument.

She recognizes that you’re talking about something important that deserves to be discussed, but that things are started to get heated and she doesn’t want that.

So she asks, “Hey, can we carry on this conversation in the kitchen?”

You reply, almost without thinking, “Sure…Okay.”

Before you know it, you’re in a different room and it feels different. This is a great chance to start over again, and approach the conversation from a more conscious mindset.

And this feeling of a “reset” can be one of the best ways to stop arguing with your spouse, even if the effect is a bit subconscious.

Repair Attempt #3: Go for a Walk Together

Another way to break the tension is to go for a walk together. This works really well with emotionally-charged situations.

Not only does it involve “switching rooms” by going outside, but when you’re walking side-by-side it feels more like you’re easing into your difficult conversation.

You’re approaching it head-on without all the pressure of being face-to-face, which can feel like a confrontation.

For my wife and I, the greatest conversations happen when we’re driving because I have to keep looking forward.

I’m not saying you should avoid eye contact, but consider it taking a break from staring at each other’s frustrated faces.

Another tip along these lines is to hold hands. It just warms the heart and serves as a reminder that you’re both coming from a loving place.

Even if you’re really angry, it’s pretty hard to hold their hand and look into their eyes without feeling soothed enough to get back on track about whatever the conversation is supposed to be about.

Be the first to reach out and gently hold your partner’s hand, and you’ll see the difference it makes.

Repair Attempt #5: Sit Beside Each Other

Like I was saying before, no one ever said you have to sit face-to-face across the table from each other and talk things out. It can feel kind of confrontational.

Instead, try sitting beside each other, because then you can concentrate on the topic at hand without getting caught up in body language – which may or may not be tied to what’s really going on.

Now, of course you want to be tuned into their mood. But you also don’t want unhelpful distractions.

If, for example, my face gets some sort of weird look all of a sudden and my wife sees that, she’s going to respond to it.

Maybe I just have gas, though!

I might be uncomfortable, but it’s not about what we’re talking about. It’s something else. In the heat of the moment, however, it’s easy to misunderstand.

Obviously, as you understand each other and connect better over time, the fewer misunderstandings you’ll have.

But body language will always influence us in ways we’re not even aware of, so try sitting beside each other and see how it feels.

Human nature is what it is, despite our best intentions. So until the day comes that tempers never start to escalate, you have these five repair attempts.

Try each of them and see how they go for you. You might even come up with your own and personalize things for your own relationship and experiences.

The main thing is to 1) be conscious when tension is occurring, and 2) use your communication skills to break the pattern and get back on track again.

You’ll find it helps repair your conversations and does preventative maintenance on your relationship as well.

And those are two keys to stop arguing with your spouse.

A New Way to Spend Date Night at Home

The Time to Work on Your Marriage is Now!

I love these ideas, but also want to add caution with #1 and 4; simply because of my experience.

#1 – I have been through a lot of counseling with my wife, and we have found that my family in particular would use humor to avoid talking about hard topics, and it evolved into using humor to keep our relationships barely skin deep. As long as you do not use this to avoid talking about a topic, but simply to break an argument then I can see it as beneficial. Just make sure to finish that topic so it doesn’t get swept under a rug.

#4 – Touch.. a really hard topic for me. For a part of my childhood there was an unwritten rule (though verbally described once) that if someone asks for a hug, then it would not hurt you to give them one, so you are expected to give it. And if you felt like you needed a hug then you should feel free to ask for it. I LOVE Hugs. But this led to unmet (and unreal) expectations in my marriage. So please be careful with this one. Be thoughtful and absolutely intentional. Your body is your own, and the other person’s body is theirs. Discuss it before hand so the other person is on board with the idea, but I ask my wife if I can hold her, can we embrace, can I hold your hand, etc. And I remind myself that if she does not want it, then it is her being true to herself. If it’s really tense, I try to remember to preface it with something like ‘I want you to be comfortable with…’ or ‘I want you to want it also…’ that way she is verbally reaffirmed to choose what she wants. And another reminder for myself as well is that this is all *In That Exact Moment* and it could change in 5 seconds.