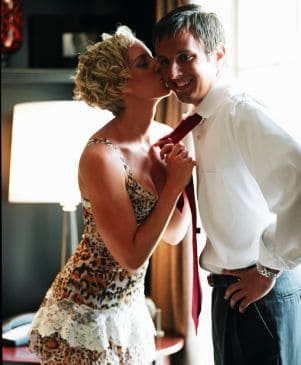 This is a guest post from E. Umana from Christian Marriage Works.  I hope you enjoy his interesting take on a current trend toward dating to avoid loneliness rather than to find a marriage partner.

We’re in the midst of a raging recession with global reach, and many economists are speculating about the possibility of a “double dip” recession. People have lost jobs, homes, cars, and other property, and marriages are strained under the weight of mounting debts and other economic problems.

But there is one “industry” that is defying the economic gloom and doom.  According to a report from Fox News, some online matchmaking services are reporting double-digit increases in the number of new members.  They describe the pace at which people are trying to find a new partner as being frenzied.

It seems that, despite the sometimes high monthly cost, people want to reach out to one another and be together.  In other words, they don’t want to go through this economic downturn alone.

Dating for All the Wrong Reasons?

Unfortunately, many of these people (not all) are lonely and not seeking a partner from a Godly standpoint,as in seeking their lifelong soul mate, partner, fellow worshiper, lover and co- parent of any future children. In fact, I believe many of these people are simply looking for someone to “hook up with.”  Some of them will marry after many years of getting to KNOW each other in the biblical sense, prior to marriage.

People are social creatures, and they need to interact with other people. When interviewed in the Fox News story, several people stated the need to connect and not face all this uncertainty by themselves.

However, they also mention the advantage of having an almost unlimited number of potential partners to interact with and weed out the incompatible (the golddigger, the psycho, etc.).  As a bonus, they have more basic information on the potential mate than they otherwise would meeting someone at work or from a chance encounter at the laundromat.

One can sympathize as these are lonely people who want companionship and perhaps the ability to share expenses in these difficult times. However, in my opinion, it is better to be alone than to be with the wrong person. No matter how bad the economy is a relationship started out of loneliness, desperation or a desire to share expenses will not last in the long run.

Better to live on a corner of the roof than share a house with a quarrelsome wife (or husband). Proverbs 21 verse 9 (NIV)

What do you think?  Do you agree with the guest author’s view that dating out of loneliness or economic despair is outside of God’s intentions?

E.Umana is an article author and blog owner, and his various articles on marriage and internet marketing are posted and republished in various places all over the internet. His blog is a christian blog called Christian Marriage Works at askme7.com where you can download his e-book 12 Marriage Killers, which explains how to spot the behaviors that can create conflict and destroy a marriage.

Relax! How A Few Minutes Of ‘Me Time’ Can Make You A Better Wife

Great Valentine’s Day Gift Ideas for Her That Last Forever

The Art of Right Timing in Communication

Yes! I do think that dating out of loneliness (especially when it involves sexual intimacy) is outside of God’s intentions for dating. As a college student (and an RA in the freshman dorms at school) I am basically surrounded by casual dating, or more accurately, casual sex. The world (especially my generation) seems to have terribly confused the words love and sex, commitment and fun. It is definitely better to be alone than to be with the wrong person…if only more people understood that. Individuals have to clearly understand his/her immense worth in the eyes of God before seeking worth in another person…otherwise he/she will never be satisfied which leads to two broken hearts and often times a lot of regret!

Thanks for sharing your thoughts, Ellen. Your perspective as a college student and especially an RA in a college freshman dorm (oh my, you must have some stories) is really valuable, and I’d bet you see A LOT of examples of dating for the wrong reasons.

I personally don’t see dating out of loneliness being a problem. Of course, not being a believer in pre-marital sex, when I talk about dating out of loneliness I am referring to getting to know someone, becoming friends and seeing if love will develop. Although dating out of economic despair is probably never a good idea. Also, I do not believe God’s view on relationships and marriage includes the idea of a “soul mate”

And just out of curiosity, for that Bible verse, does the NIV really add “(or husband)” …because thats not what my King James Version says 🙂

Thanks for your thoughts, Eric! I’ll have to let the guest author respond to your Bible question…sounds true to me though. 🙂

I absolutely agree with the author of this post. God did make us to be relational and not to be isolated persons. But that does not give us the license to fulfill our loneliness any way we see fit. The feeling of loneliness should point us to God and seek His best for our lives. How can we be God centered when we are centered on selfish desires, and the lusts of the flesh?

Thanks, Sarah! I think your last sentence provides the perfect summary. I actually just finished a guest post for Simple Marriage that focused on the idea that we have to be selfless if we want to have a successful marriage. It’s about careers and not sex, but it’s true in both instances!

I couldn’t agree more with you, Mike. The state of infatuation we often call the feeling “love” fades after a year or two. Beyond that and for the rest of your married life, love is truly a choice.

Finding people to “hook up” with is a growing trend that truly scares me. It is my opinion that people can find companionship without participating in pre-marital sex. There are plenty of options for this and I don’t understand why those online dating sites cannot take the time to promote a better value system to their clients.
It is definitely “better to be alone than with the wrong person” but I don’t believe it is necessary. One can have a platonic relationship with a room-mate, but they must clearly address the conditions and stay away from getting too “comfortable” with each other.
Concerning the issue of trying to find someone to help with the financial burden, that is completely the wrong approach to dating. There is only one guarantee in life and that’s God, not financial security. Just because your “partner” is financially set now doesn’t mean that they will continue to be that way.
http://www.christianlovetoys.com – A Safe & Sexy Store for Christian Married Couples

So how do you know if you’re dating for the wrong reasons?

I am very serious when it comes to who I date. Dating is a way to see if you’re compatible enough for marriage, so why date someone who doesn’t meet your basic criteria for a spouse? (My only “MUST HAVE” is that they have a desire to grow closer to God, and that I can see how they’re working towards that. Not just words, but action. I believe as long as you have that, anything is possible. The rest is just preferences.)

One thing I’ve inherited is my way of thinking, I am very analytical and tend to overthink things. So it’s hard for me when I’m trying to make sure I’m putting Christ first in my life and I’m interested in a guy. I start asking a lot of questions like “Is this a God-endorsed relationship, would he approve or want this? Am I just interested in this guy cuz I’m lonely, and I actually need to focus more on God? Do I like him cuz I’m confusing my feelings with compassion?” I get very confused. I love people, I want to help better the lives of everyone I know, I want to “fix” them and help them feel better about themselves. I’m slowly learning to appreciate people’s weaknesses though, in addition to their strengths, since it’s part of what makes them unique. Also, I can help be God’s hand in their lives but I must relinquish control to Him, because only He can truely help them in the ways they need.

So what’s the reason for me liking this person, am I making a mistake? I know by dating them I’m not necessarily marrying them today, so I need not worry so much. Yet I do, why is that? Am I taking things to seriously and just need to loosen up a bit? (although still being smart about things) Idk. Sorry to let things out like this but I’m so confused. Anyone got some Godly advice? Thanks so much for listening.

Oh, and I like your acticles. 🙂 I’ve read quite a few now, very helpful.